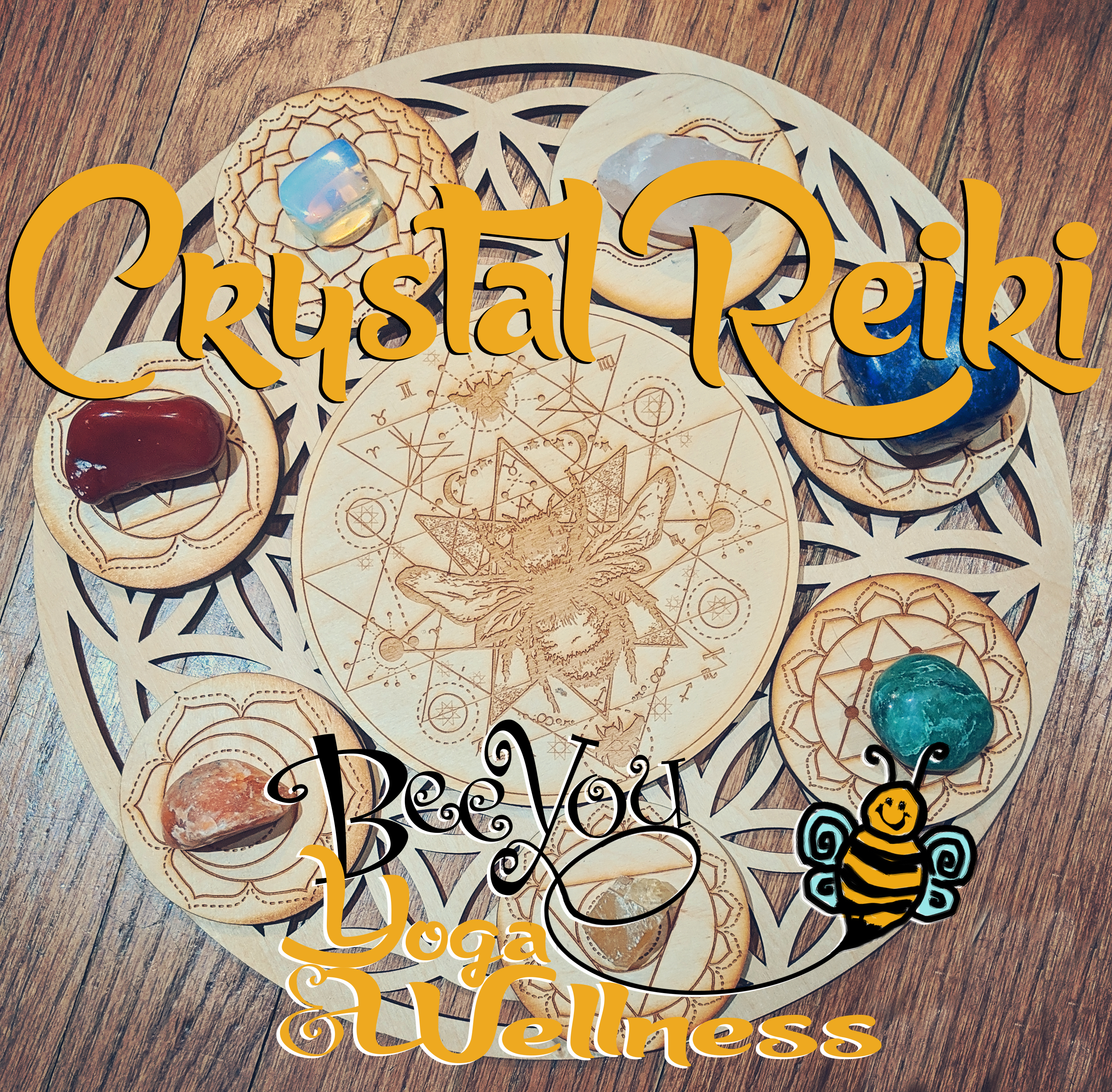 Coming soon to Bee You Yoga and Wellness Crystal Reiki.

The presence of Reiki energy amplifies the energy of the crystals and helps the body-mind of the recipient focus on specific areas of the body, conditions or levels of awareness that are ready to heal. In a Crystal Reiki session, Reiki energy is coming from above through the crown chakra while the crystals used in the session bring in a grounding energy from the earth. Together these energies work seamlessly.

A Crystal Reiki practitioner uses Reiki energy to create a state of presence that is focused and accesses a higher level of consciousness. This presence holds the space for Reiki energy to activate and amplify the crystal energy for a specific purpose so that the desired outcome can be achieved.

What is Crystal Reiki?

“Crystals have been used for centuries as tools for healing and increasing levels of awareness with each stone being specially selected for specific frequencies and properties. Although combining Reiki with the use of crystals is relatively new, this branch of Reiki has the potential to not only transform your current Reiki practice, but our world as well. Crystal Reiki utilizes the frequencies that reside within the earth and amplifies them through the power of Reiki energy. By infusing these powerful vibrations with the consciousness of Reiki energy, the shifts can be targeted and profound.

The earth vibrates at a specific frequency known as the Schumann resonance. Traditionally this resonance is thought to hover around 7.8 Hz though it varies from region to region. Since the 1980’s however this frequency has been thought to be rising. This is interesting because science is beginning to understand that we are impacted deeply by the earth’s resonance and as it increases, the dissonance between our own frequency and that of the earth is felt deeply on all levels. These frequencies are thought to impact our autonomic nervous system, brain and cardiovascular system.

In your life and the world around you, you may be noticing that things are getting more polarized. People are gravitating towards the ends of the spectrum with regard to emotions and consciousness. As the frequency of our planet increases, we are given a choice to either raise our own awareness and frequency so that we will feel resonance with earth or to resist it and feel the effects of physical imbalance as well as mental/emotional chaos.

These shifts in the earth’s geomagnetic activity are correlated with hospital admissions, death from heart attacks and strokes, as well as many other physical imbalances such as depression, fatigue, mental confusion, and even the number of traffic accidents that occur. Our body’s ability to maintain balance is greatly impacted by the shifts in frequency of the earth. Studies have even connected major political and social events to the earth’s energetic activity such as solar flares. In one study, 80% of the most significant events occurred when solar activity was at its peak.

On the flip side, it is thought that just as the frequencies of the earth impact us, our collective frequencies also have a dramatic effect on our planet. There have been studies that show when a group of individuals unite in a state of awareness, the randomness in their environment is reduced.

A study that examined the ability of an individual to affect the DNA of an individual was conducted by cellular biologist Glen Rein. The individual’s studied were trained to elicit specific emotions such as love and appreciation and then hold a test tube of DNA. When tested, there was no significant change in the test tube samples.

Rein then had a second group of trained individuals create not only the positive emotions, but also hold an intention which in this study was to either wind or unwind the strands of DNA in the sample they were holding. In this group there were significant changes in the DNA with some samples being wound or unwound as much as 25%.

The third group of participants were asked to hold only the intention without a positive emotional state and the samples with this group experienced no change.

In this study, the combination of the intention of the practitioner with their own state of presence elicited significant change. Just as thought needs the catalyst of presence to be effective, crystals need the energetic infusion of universal life force to transmit their balancing properties. The combination of Reiki and the crystals you use will create a unique electromagnetic signature that will send a specific signal out into the field and draw in the information needed to fulfill the set intentions.

Crystal Reiki has the potential to connect you with the rising consciousness around you and help you align with it and use it to help yourself and others. As we connect and in a state of presence use Reiki energy to amplify the energy of the crystals we work with, that energy can in turn positively impact the earth so that a symbiotic relationship can be created.

One study demonstrated that even a group of 2,500 individuals taking time to be present through meditation elicited a 25% reduction in crime rates in a population of one and a half million. In your Crystal Reiki sessions you will not only be in a state of heightened awareness, but you will be harnessing the universal life force energy and using crystals to focus and refine that frequency. As Aristotle noted, the whole is greater than the sum of its parts. Together, within the specific energy field of our work, miracles can occur with the individuals we work with and with our world.”

“Crystals are solid symmetrical structures with regularly ordered atoms and molecules that are packed in repeating patterns which extend in all three dimensions of space. The shape and atomic structure of a crystal define it. The defects within a crystal can also define its healing properties and rather than being seen as irregularities, can be intuitively used with powerful effects.

Although crystals are considered a part of the mineral kingdom, minerals are less transparent than crystals and darker in color with a consistent chemical structure. Minerals are thought to strengthen the physical aspects of the body such as bones, tissue etc. Both minerals and crystals can be used to help balance the recipient in a Crystal Reiki session. Similarities can be found in the structures of a crystal and our own DNA with dodecahedrons and icosahedrons found in both.

The healing properties of each crystal can be associated with the way in which it was formed. Much of the earth’s crystals were formed millions of years ago. Crystals are formed in liquid such as magma or water as well as gas that is pushed up from the earth. As the liquid evaporates, the minerals within that liquid bond. The harder crystals are formed within higher temperatures.

The geopathic stress that is present as a crystal is formed also has an impact on its healing properties, with enhanced properties present. You will find that the same type of crystal found in different areas with different geopathic stresses will hold different resonances. Regardless of form, crystals have the ability to absorb, channel, focus and emit energy. The energy of Reiki will infuse the intentions of the practitioner and recipient as well as the energetic properties of the crystal to create a unique high frequency.

Crystals can generate energy through a process known as the Piezoelectric effect. This effect occurs when pressure is applied to the crystal which then generates energy. In the same way, if a voltage is applied to a crystal such as quartz, it will bend or slightly change its shape. We all consist of electromagnetic energy. When holding a crystal, your frequency interacts with the crystal, creating a similar type of Piezoelectric effect. The crystal vibrates and the energy it creates can be transmitted to your own internal energy pathways.

One key factor that separates Crystal Reiki from general Crystal Healing is the foundational principles of Reiki. As Reiki practitioners, we understand that our role is to be the observer that holds space for the healing within the recipient to occur. We do not diagnose or prescribe and allow the recipient’s body to be the active participant in their healing. We are also detached from the outcome. Although we set intentions at the start of a Crystal Reiki session and use our intuition as well as our understanding of crystals to focus the energy of the session, we understand that the session will proceed exactly as the recipient’s body needs it to and for the highest good of all concerned. With no expectations, we also do not use our own personal energy in the session. Crystal Reiki sessions instead are an energizing and healing experience for both the recipient and practitioner because Reiki energy is the amplifier in the session. Continued work with Crystal Reiki helps the practitioner to raise and balance their own awareness which extends to all areas of their life and helps to be a healing force in the lives of everyone they touch.”